Seeing Like a Copyright Lawyer: Judging Similarity in Copyright Cases

There are many ways to use empirical research in intellectual property scholarship. Work can be qualitative or quantitative, interdisciplinary or highly focused on the law. One of the most intriguing questions I’ve seen investigated empirically of late is “what makes us think that one work is similar enough to a previous one to infringe?” Given the significant expansion in the scope of copyright from pure reproduction to derivative works and substantially similar works, this is an important issue.

The two articles I highlight here approach the question from very different, but complementary, perspectives. The authors of Judging Similarity start with legal scenarios adapted from real cases and ask survey respondents whether the works are similar enough to infringe. Kate Klonick, like David Morrison, examines similarity from a cognitive science perspective, starting with what researchers already know about human judgments of similarity and difference in nonlegal contexts. (Disclosure: I advised Klonick, now pursuing a Ph.D. at Yale, on this project.)

Judging Similarity begins by noting, as others have, that substantial similarity doctrine is a mess. They hypothesize that factfinders are more likely to find substantial similarity—and thus liability—in the context of “a narrative that not only describes the intentional act of making one thing look like another but also identifies a wrongdoer.”

In their control group, subjects had minimal information and were asked to judge the similarity of images; in the test group, subjects had additional information about “the act of copying, the creation of the work or the consequences of the copying.” Information about the fact of copying or that significant effort was required to create the first work increased similarity judgments, “despite the fact that the works themselves remained the same and even though the subjects were consistently told that they had to base their assessments entirely on the works themselves.” (Subjects weren’t making the on-off determination of substantial similarity that would be required in an actual copyright case; they were rating similarity on a scale; further work is needed to see how much this kind of information affects a threshold determination that could lead to liability.)

Morality, the authors suggest, affects factual judgments, fitting into a larger literature on motivated cognition. They argue that this isn’t just a question of framing—increased attention to similarity caused by the emphasis on the fact of copying—because information about the amount of labor involved in creating the original also increases similarity judgments. Given this effect, if we’re serious about keeping “labor = right” arguments like that rejected in Feist out of the copyright system, they suggest, the law might need to change further—or accept that labor-related considerations will come back in at the infringement stage, once certain works are deemed unprotectable. Copyright law’s claim to impose strict liability might be overstated, if we see respondents’ reactions as fault-based.

Intriguingly, however, information about market substitution, or the lack thereof, did not affect similarity judgments. The authors don’t have much to say about that result, but someone like me is inclined to read this as a moral intuition consistent with current fair use doctrine: if the copying is otherwise ok—if the work is transformative, and doesn’t displace a separate and robust derivative market like the market for film adaptations of novels—then the fact that it causes market harm is irrelevant. Reverse engineering cases and the idea/expression distinction that allows copying of ideas also follow this pattern. There’s nothing inherently wrong with giving people options to choose their favorite variations on a theme, even if one seller inspired others to enter the market.

Klonick’s article takes a different approach, focusing on other features of human thought, independent of moral principles. She notes that three significant areas of copyright law involve variations on judging similarity to and divergence from an existing work: (1) originality, where there is a public domain (or even copyrighted) referent and the question is whether enough has been added to create an original work; (2) infringement due to substantial similarity; and (3) transformativeness for fair use purposes.

She explains that cognitive scientists know some interesting things about similarity judgments. For one thing, there’s a difference between similarity judgments and difference judgments—depending on how a question is framed, respondents’ answers may diverge a lot. When asked to judge similarity, people give greater weight to common features; when asked to judge difference, they give greater weight to distinctive features of each item. For another, similarity judgments are not always transitive or symmetric. If you start with A and ask about its similarity to B, you can get different results than if you start with B and ask about its similarity to A. So, Americans asymmetrically found greater similarity in the phrase “Mexico is like the United States” than the phrase “the United States is like Mexico.” Consistent with this result, people are also more likely to find similarity when the more “prominent” idea or object is the referent—the B in “A is like B.” This phenomenon, she suggests, tilts the field in favor of owners of very successful works: in strike suits brought by owners of unsuccessful works, the accused work will be more prominent and will look less similar in comparison to the accusing work, while when the successful copyright owner sues, the accused work will look more similar.

In addition, depending on the situation, feature similarity may matter less than “relational” similarity—a bear isn’t a lot like a bird, but a mother bear with a cub is a lot like a bird with a chick. Consider the following images: 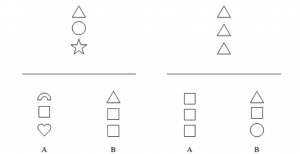 Depending on how issues in copyright cases are presented, then, factfinders may be more inclined to find important differences or important similarities. She suggests that the Roth look and feel test might help moderate this effect, though I don’t really see how that would work. Klonick also suggests that transformativeness analysis’s shift to “purpose” can be explained in relational terms: when the question is how the new work fits into the universe of expression/what social role it plays, it may be easier to see relational differences, such as the difference between a single expressive work and a component of a large database (Perfect 10, etc.).

All of these features have implications for copyright cases, though they may be hard to tease out. At the very least, they offer guidance for savvy copyright lawyers trying to frame a case in a favorable way.

What these articles give us, especially taken together, are significant building blocks. They can be combined with other empirical work, such as Jamie Lund’s study showing that lay listeners simply can’t perform the task of judging infringment of musical works by listening to sound recordings, to suggest reforms to make practice fit theory. Jessica Litman’s recent article about the history of movie infringement cases also reminds us that we haven’t paid as much attention as we should to the fact that several foundational infringement cases involved moves from one medium to another—plays to silent movies, in her examples. What makes a dialogue-laden play seem similar or dissimilar to a mostly gestural movie is a question worth asking. As we gain a better idea of how people react to different comparisons, framing, and evidence, we can try to make both jury instructions and substantive law support the outcomes we believe to be the best for copyright policy overall.