Joel Waldfogel, Copyright Protection, Technological Change, and the Quality of New Products: Evidence from Recorded Music Since Napster, 55 J.L. & Econ. 715 (2012), available at the University of Minnesota.

The constitution empowers Congress to promote the useful and the expressive arts, which Congress does through the laws governing patents and copyrights. But, promoting one may sometimes retard the other. This happens in the context of new technologies of copying and dissemination, such as the photocopier, VTR, the MP3 player, and file-sharing networks. Imposing copyright liability on the makers and users of these technologies encourages copyright owners but may discourage innovators. Shielding such makers and users from liability encourages technological innovation but may retard expressive creativity. How should we strike this trade-off, either in general or in particular cases?

This question has long been a major issue in copyright law and scholarship.1 To know what the right policy is, we should have some sense of the degree to which incentives to create content are diminished, if at all, in the face of the new technology. Indeed, much empirical work surrounding the file-sharing litigation has studied the effect file-sharing had on music sales. This body of literature contains diverse views, and the debate on the empirics is sometimes as heated as the one on the theory and policy side.2

Joel Waldfogel’s paper is a recent and valuable contribution to the empirical literature. I like it lots because it takes a new approach to quantifying the digital age’s net effect on incentives to create expressive works. Waldfogel does not believe that quantifying the reduction in copyright owners’ revenue is the most important question. Technological change may reduce the amount that copyright owners can receive for their content, but technological change may also reduce copyright owners’ cost of producing and disseminating content. If the latter effect is greater than the first, technological change may actually enhance incentives to create. To know whether and what kind of legal intervention is needed, we need to determine which effect is greater. The paper tries to quantify the technology’s net effect on incentives to create by looking at what has happened to the quality of sound recordings produced since the advent of online file-sharing in 1999.

The paper does so by constructing three original measures for the quality of music over time. One is an index of the volume of high quality music since the 1960s. It is based on critics’ retrospective lists of the best works over various time periods (e.g., Rolling Stone’s 2004 list of the 500 best albums based on 273 critics and expert musicians opinions, or Pitchfork Media’s 200 best albums of the 2000s etc.). It contains 88 rankings of either songs or albums from Anglophone countries. Two additional indices track the quality of music from different vintages using data on record sales (relating to RIAA’s gold and platinum certifications awarded between 1958-2010) and airplay data (during 2004–2008 of songs originally released in previous years). Here, the assumption is that higher quality music should generate more sales and airplays over time, surviving longer in the market. These two indices evaluate vintages of music by the extent to which records from a particular year continue to sell, or to be played, years later.

Below are graphs of two of the music quality indices over time (the certifications graph is very similar to the airplay one, both being measures of public enjoyment): 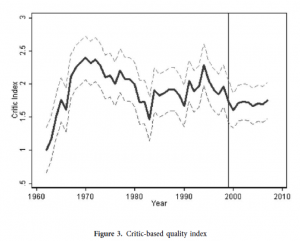 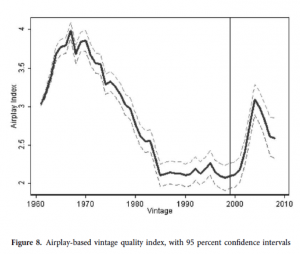 The paper finds that these indices—measures of music quality—are consistent with each other, and that there’s no evidence that the quality of music declined in the years since Napster. The paper’s certifications and airplay data indices suggest that music quality has rather increased substantially since 1999 (as is shown on the last graph above). The paper concludes by suggesting that its findings are relevant to policymakers setting the strength of copyright protection.

Several assumptions need to be made before using the paper for policymaking, and I would like to note two. First, one would have to accept the indices as good measures for industry output. One could question, however, whether this is so. Clearly, altering the measure for quality may alter the findings of what happened to that quality over time, and thus may alter the policy implications. For example, the finding that music quality increased significantly post-Napster is borne by two of the paper’s indices (the airplay and the certification indices) but not by the third (the experts’ index). It would thus be interesting to see whether the finding of non-decreasing music quality is robust to the use of other measures of quality.

But even assuming that the paper’s findings are robust to alternative measures of quality, another issue remains: What policy implications is one to draw from the paper’s findings? Here, the paper provides qualified guidance. One possibility, implicitly suggested at the conclusion of the paper, is that policymakers should not strengthen copyright protections since copyright owners’ reduced revenue (and potentially profit) was not associated with a decline in the quality of the music industry’s output. The paper’s findings, however, cannot support such a conclusion unequivocally. The years just prior to Napster’s advent and since were characterized not only by technological change, but also by legal change. By and large, copyrights have been strengthened over the time period. We cannot know whether incentives would have remained the same but for the legal change. Perhaps enhancing copyright owners’ rights was necessary to keep production levels constant. It is also possible that a lesser, or a greater, invigoration of copyrights would have enhanced music quality. Largely abstracting away from legal change, the paper leaves these possibilities open.

But these two remarks should not take away from Waldfogel’s substantial contribution to the literature. Rather, they are to acknowledge how much he has pushed the ball forward and how much more insight can be gained on the intersection of copyright law and technological innovation if more research is conducted following his approach.