How Copyright Prevents Us From Getting the Books We Want

Paul Heald, The Demand for Out-of-Print Works and Their (Un)Availability in Alternative Markets (2014), available at SSRN.

Back in mid-2013, Paul Heald posted to SSRN a short paper that already has had far more impact than academic papers usually have on the public debate over copyright policy. That paper, How Copyright Makes Books and Music Disappear (and How Secondary Liability Rules Help Resurrect Old Songs), employed a clever methodology to see whether copyright facilitates the continued availability and distribution of books and music. Encouraging the production of new works is, of course, copyright’s principal justification. But some have contended that copyright is also necessary to encourage continued exploitation and maintenance of older works. We find an example in the late Jack Valenti, who, as head of the Motion Picture Association of America, in 1995 made the argument before the Senate Judiciary Committee that it was necessary to extend the copyright term in part to provide continued incentives for the exploitation of older works. “A public domain work is an orphan,” Valenti testified. “No one is responsible for its life.” And of course if no one is responsible for keeping a creative work alive, it will, Valenti suggests, die.

Is that argument right? Enter Paul Heald. Heald’s 2013 article employs a set of clever methodologies to test whether copyright did, indeed, facilitate the continued availability of creative works—in Heald’s article, books and music.  With respect to books, Heald constructed a random sample of 2300 books on Amazon, arranged them in groups according to the decade in which they were published, and counted them. Here are his findings:

© 2013 by Paul Heald. All rights reserved. Reprinted with permission of Paul Heald.

If you hadn’t already seen Heald’s article, the shape of this graph should surprise you.  You would probably expect that the number of books from Amazon would be highest in the most recent decade, 2000–2010, and would decline continuously as one moves to the left in the graph—i.e., further into the past. On average, books are, all things equal, less valuable as they age, so we should expect to see fewer older books on Amazon relative to newer ones.

But that’s not what we see.  Instead, we see a period from roughly 1930 to 1990, where books just seem to disappear. And we see a large number of quite old books on Amazon. There are many from the late-19th century and the first two decades of the 20th century.  Indeed, there are far more new editions from the 1880s on Amazon than from the 1980s.

What on earth is causing this odd pattern? In a word: copyright. All books published before 1923 are out of copyright and in the public domain. And a variety of publishers are engaging in a thriving business of publishing these out-of-copyright works—and so they’re available on Amazon. In contrast, a large fraction of the more recent works—the ones under copyright—simply disappear. Maybe they’ll spring back to life when (or if?) their copyright expires. But for now, copyright doesn’t seem to be doing anything to facilitate the continued availability of these books. In fact, copyright seems to be causing some books to disappear.

Heald does a similar analysis for music, and this analysis too shows that copyright causes music to disappear, relative to music in the public domain. The effect is less pronounced than in the case of books, but it is still there.

In short, Heald’s paper placed a big question mark after the “continued availability” justification for copyright. If we care about works remaining available, then copyright, in fact, seems to be hurting and not helping.

Now Heald is back with a follow-up paper, The Demand for Out-of-Print Works and Their (Un)Availability in Alternative Markets, that takes on the most important question raised by his first: Should we be concerned that copyright appears to make works disappear? If there is no consumer demand for these disappeared works, then possibly not. But if there is consumer demand for the works that copyright kills, then we should care because that demand is not being met.

Heald employs a number of tests to determine whether there is consumer demand for the books that copyright makes disappear. Read the article if you want a full account, but it is worthwhile to give a couple of highlights.  In a particularly nifty part of the paper, Heald compares books available on Amazon with those available on the biggest used books website. The graph is instructive:

© 2014 by Paul Heald. All rights reserved. Reprinted with permission of Paul Heald.

That gap between the red (Amazon) and blue (used book) curves suggest that used book sellers take advantage of a market in many books that copyright has made disappear from new book shelves, which suggests that there is consumer demand for these books.

Heald then examines other possible ways that the market may provide access to works that copyright has made disappear. For music, Heald looks to see whether copyright owners are digitizing out-of-print records and either selling them on iTunes or posting them on YouTube. The answer, hearteningly, appears to be yes. Unfortunately, the picture for books is much less reassuring. As usual, Heald’s chart speaks more clearly than words: 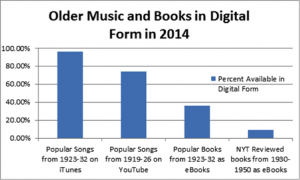 © 2014 by Paul Heald. All rights reserved. Reprinted with permission of Paul Heald.

So why the difference between the music and book publishing industries when it comes to the availability of older titles still under copyright? I’ll leave that as a mystery—and I hope your unslaked curiosity will lead you to read Heald’s article. It is well worth your time.

Cite as: Christopher J. Sprigman, How Copyright Prevents Us From Getting the Books We Want, JOTWELL (March 31, 2014) (reviewing Paul Heald, The Demand for Out-of-Print Works and Their (Un)Availability in Alternative Markets (2014), available at SSRN), https://ip.jotwell.com/how-copyright-prevents-us-from-getting-the-books-we-want/.