Our Lyin’ Eyes: Design Patents and the Perils of an “Eyes Alone” Approach to Novelty and Infringement

Thanks in large measure to the ongoing worldwide smartphone patent brawl between Apple and Samsung, patents are in the news a lot these days. And that is especially true of design patents – i.e., the branch of the patent law that grants rights in novel, non-obvious and ornamental designs. Apple pressed design patent claims against Samsung that included broad claims of ownership over rectangularly-shaped electronic devices. To many observers, these seemed . . . well . . . crazy. Take Apple’s patents on the shape of the iPhone. Here’s a design drawing from the Apple D677 patent. 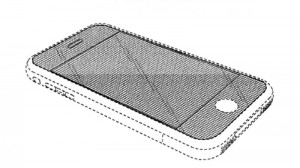 The patent claims the shaded portion of the iPhone’s shape – the rectangular shape of the face, the edge-to-edge screen, the shape and placement of the mic. But is this a good patent? The overall shape claimed doesn’t seem novel. Today’s smartphones are increasingly just pocket-sized screens, and screens have been rectangular for a long time. Some have responded that this patent is novel to the extent it claims a rectangle with rounded corners, but the rounded corners are functional – just try carrying a smartphone with sharp corners.  And unlike utility patents, which, as their name suggests, protect useful things, functionality is a disqualifier for a design patent, which is concerned only with a design’s ornamental quality. What about the shape and placement of the mic? Well, if this is the ground of novelty, it’s a trifling one. But for the moment, give the benefit of the doubt to Apple, and say that they are entitled to a monopoly on their claimed shape and placement of a smartphone mic. We still have a problem. How do we get a jury to focus on whether Samsung copied the mic, and only the mic, and not the other features included in the patent drawing – features that, if what’s said above is right, cannot properly be owned by Apple?

This is a problem that recurs constantly in design patent disputes, and one which brings us to Rebecca Tushnet’s new piece in the Intellectual Property Law Journal, The Eye Alone is the Judge: Images and Design Patents.1 Tushnet’s piece is short and characteristically lucid, and I would recommend it to anyone interested in grappling with how best to understand the breadth of design patent claims and the test for design patent infringement – both key inquiries in a field that seems to be growing in importance to IP scholars and the public debate about innovation and copying.

As Tushnet notes, most designs involve a mix of novel and non-novel or functional features.  These designs are protectable only to the extent of their novelty, or to the extent they offer a novel combination of otherwise familiar features. But how to separate the novel wheat from the non-novel chaff? Relying on the design drawing pushes us toward a gestalt evaluation of overall appearance, and away from the dissection into novel and non-novel elements that is required to ensure that a patentee monopolizes only those design elements that are truly new. If the overall impression of the design, as conveyed by the design drawing, is the measure of infringement, how are factfinders to avoid expanding the scope of the design patent past its proper limits when an accused design looks like a patented design because of similarities in unprotectable features?

The same problem comes up in copyright, and that branch of the law doesn’t deal with it very well. The “substantial similarity” test invites comparisons that include non-copyrightable elements, despite some courts’ attempts to “filter” such elements out of the analysis.

So should we have a written description requirement for design patents, as we have for utility patents? That is, should we require would-be patentees to describe in words the novel features of their design, and separate those features from other parts of the design that cannot properly be claimed in the patent?

The Federal Circuit, in a case called Egyptian Goddess, Inc. v. Swisa, Inc.,2 rejected a general written description requirement for design patents and held that, in most cases, design patent images should be left to speak for themselves. And the Supreme Court has held that the standard for infringement in design patent disputes is also purely visual. In Gorham Co. v. White,3 the Supreme Court stated that “if, in the eye of an ordinary observer, giving such attention as a purchaser usually gives, two designs are substantially the same, if the resemblance is such as to deceive such an observer, inducing him to purchase one supposing it to be the other, the first one patented is infringed by the other.” In sum, the Court held that “the eye alone is the judge of the identity of the two things.”4

So in most design patent cases we rely on “the eye alone.”  Is this a good idea?

At least three arguments have been assayed against a written description requirement for design patents. The first is that proper infringement analysis shouldn’t involve any dissection, because ordinary observers view designs as a whole and don’t decompose them into their constituent elements or filter out functional or unprotectable parts. That argument is probably an accurate description of how consumers view designs. But it is nonetheless a weak justification for an “eye alone” approach to design patent. Taking it seriously would require us to abandon the novelty screen for design patent, and this we cannot do without violating the constitutional command that patents be granted only for “inventions.”

The second argument against written description focuses on the difficulty of describing complex designs in words. There is certainly truth in this. Tushnet gives the example of a star-shaped ceiling fan. The written description for the design requires more than 400 words, and proves difficult to digest, even for someone practiced in the art of understanding patent claims. But even if words are difficult, they often prove necessary, not least because design patent images often fail to speak for themselves.  Tushnet points out that courts dutifully recite the Egyptian Goddess injunction against the need for written description in design patent cases, but then engage in lengthy written analysis comparing the design drawing at issue to the prior art. Obviously, in the view of these courts, it is far from clear that any fair-minded person, viewing the patentee’s image and comparing it with the prior art, would reach the same result the court reaches in a particular case.

Read Tushnet’s article to see her careful response to this argument in full.  If you do, you may be left, as I was, with the following thought. The primary function of a written description requirement would be to push back against the tendency of the “eye alone” approach to grant rights in features that are not novel and properly belong in the public domain.  The effect of this would be to narrow design patents overall, and, as a consequence, to dull the incentives of firms to obtain them. But would that potential disincentive to patent designs, in turn, reduce the incentives of firms in a variety of markets to invest in new designs? That depends on whether competitive forces – including the ways in which design contributes to function – are sufficient to provoke substantial investment in improving product aesthetics. And on that overriding question, we know very little.